What should I do if I am accused roadside of DUI marijuana? 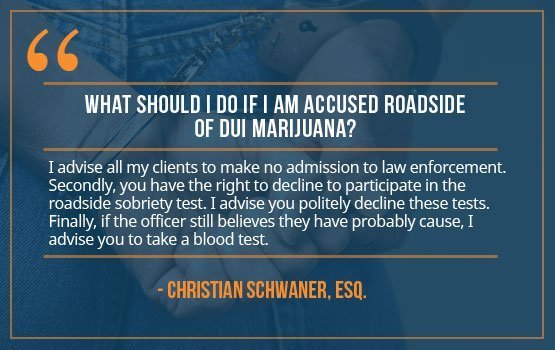 Marijuana use impairs short term memory, reaction time, hand-eye coordination, concentration, time perception, and depth perception. The legalization of marijuana has not changed the law regarding impaired driving – getting high and getting behind the wheel will result in a DUI.

Due to marijuana’s impact on a person’s motor skills and judgment, Colorado has put a limit on the amount of marijuana a driver may have in their system. Though people metabolize THC at different rates, and can vary widely from person to person, the state has settled upon a legal limit is 5 or more nanograms of THC per milliliter of blood.

If you are pulled over for suspected driving under the influence of marijuana, you are advised not to make any admission to law enforcement. You are also allowed, and advised to politely refuse to participate in a roadside field sobriety test. Currently, police do not have a breathalyzer test for marijuana use.

If pulled over, you may be asked to perform a series of field sobriety tests, or the officer may immediately arrest you for impaired driving. If the officer still reasonably believes he has probable cause that you are over the limit, you will be arrested and asked to submit to a blood test at the police station. If you are asked to take a blood test for marijuana impairment, it is imperative that you consent.

Why You Must Consent to a Blood Test

The Express Consent law requires any driver pulled over by Colorado police to consent to a chemical test if the officer reasonably believes that the driver is driving under the influence of alcohol, drugs, or both. If you refuse consent to a blood test, you will immediately lose your driver’s license and will be categorized as a high risk driver.

The punishment for refusing a blood test includes one year without a drivers’ license, two years of mandatory ignition interlock, as well as therapy and alcohol education in compliance with the law. Therefore, if you are ever pulled over by an officer and they suspect impaired driving, you must remember to consent to a chemical test in order to avoid the punishment for refusal.

If you have been arrested for a DUI involving Marijuana in Colorado, you need an experienced attorney on your side. The Law Offices of Christian A. Schwaner, P.C. can help you understand your rights. Contact us today to discuss your case.