What does the field sobriety test for marijuana look like? 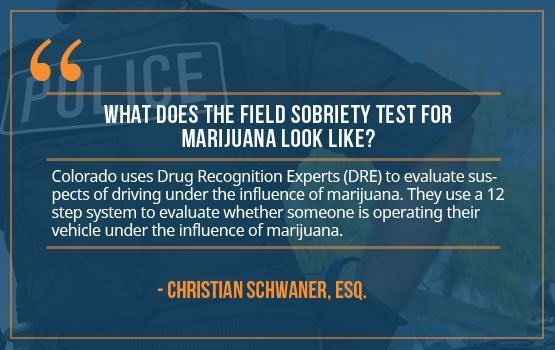 Because of the different effects of alcohol versus marijuana impairment, the field sobriety tests for marijuana must be different. An officer currently cannot test marijuana content in the blood with a breathalyzer – THC levels are must be measured by a blood test. A urine test can show a positive result if the driver used marijuana within a few days or weeks of the traffic stop. Though people metabolize THC at different rates, and can vary widely from person to person, Colorado legislature has settled upon a legal limit is 5 or more nanograms of THC per milliliter of blood.

Currently, police do not have a breathalyzer test for marijuana impairment. If pulled over, you may be asked to perform a series of field sobriety tests conducted by a drug recognition expert. The officer may also immediately arrest you for impaired driving.

The state of Colorado uses drug recognition experts to determine whether a person is driving under the influence of marijuana or another drug. A drug recognition expert is a police officer who takes an elective 72-hour course that will train them to determine whether a driver is driving under the influence of drugs or alcohol, rule out health conditions, and determine what substance the driver is impaired by.

The drug recognition experts follow a 12 step process determined by a standard checklist. These steps have been determined by the National Highway Traffic and Safety Administration. The NHSTA has standardized the process – the tests are conducted in the exact same way every time. A drug recognition expert follows the 12 steps exactly, even if a step is not relevant to indicate level of impairment.

If you have been arrested for a DUI involving Marijuana in Colorado, you need an experienced attorney on your side to help you understand your rights, and reduce your penalties. The Law Offices of Christian A. Schwaner, P.C. can help. Contact us today to discuss your case with a free initial consultation.