Should I refuse a blood test? What will happen if so? 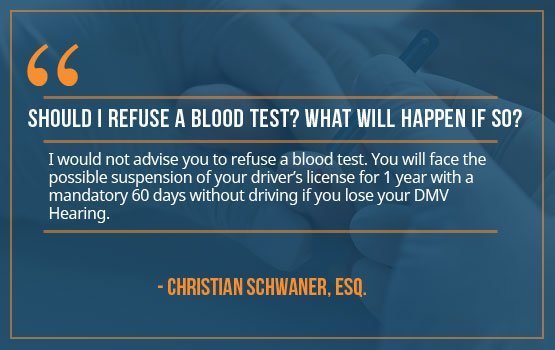 Marijuana legalization in Colorado comes with new laws regarding driving under the influence. The law in Colorado has set a legal limit for the amount of active THC in your system to be considered impaired. Though people metabolize THC at different rates, and can vary widely from person to person, the state has settled upon a legal limit is 5 or more nanograms of THC per milliliter of blood. If police do suspect that you are driving while high on marijuana, the officer can require you to submit to a blood test. Refusing this test is not advisable, as refusal comes with a host of consequences.

Currently, police do not have a breathalyzer test for marijuana use. If pulled over, you may be asked to perform a series of field sobriety tests, or the officer may immediately arrest you for impaired driving. If the officer then reasonably believes you are over the limit, you will be arrested and asked to submit to a blood test at the police station.

Colorado’s Express Consent Law: Why You Must Consent to a Blood Test

Arrested for Marijuana DUI and Refused a Blood Test?

If you have been arrested for a DUI involving Marijuana in Colorado, The Law Offices of Christian A. Schwaner, P.C. can work to reduce your penalty, and explain your rights and obligations. Contact us today for a free initial consultation.