Will I lose my license if I am convicted of DUI of marijuana? 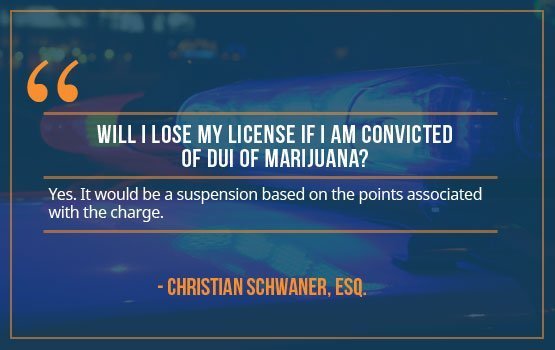 Marijuana was legalized in Colorado on January 1, 2014. As a result, the Colorado Department of Transportation has stepped up its education and outreach efforts in order to curb drugged driving. Marijuana use impairs short term memory, reaction time, hand-eye coordination, concentration, and time and depth perception. The legalization of marijuana has not changed the law – getting high and getting behind the wheel will result in a DUI. Due to marijuana’s impact on motor skills and judgment, Colorado has put a limit on the amount of marijuana a driver may have in their system.

Colorado’s Express Consent Law: Why You Must Consent to a Chemical Test

Will I Lose My Driver’s License?

The short answer is yes, for a specified amount of time. For a first offense, you are subject to license suspension and points against your license. Additional DUI convictions may result in increasingly serious consequences that may affect your ability to drive to work or school.

You may also be required to install equipment in your car that measures your level of impairment before your license is able to be reinstated. The lower end of penalties includes license suspension for 9 months. The second conviction may cause your license to be suspended up to a year. A third conviction can revoke your license for up to two years.

If you have been arrested for a DUI involving Marijuana in Colorado, The Law Offices of Christian A. Schwaner, P.C. can work to reduce your penalty. Contact us today for a free initial consultation.