How long should I wait to drive after ingesting marijuana? 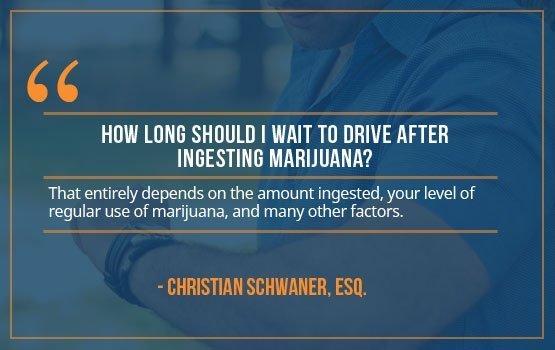 While the question is a common one, there is not an easy response. Too many factors involved for there to be a simple response. Among the factors are: how much marijuana did you smoke? How much tetrahydrocannabinol (THC) did the marijuana you have contain, and how much of it did your body absorb? Also, how long does it take your body to expel the THC it has absorbed so that it no longer has any effect on you? As you can see, the question is not easy to answer.

You probably know that Colorado has legal limit for blood alcohol content, but there is also a legal limit for THC. Under the laws of Colorado, as a driver you are considered impaired if your blood contains 5 nanograms or more of THC. So an easy answer to the question of how long you should wait to drive after ingesting marijuana is until you have less than 5 nanograms of THC in your system. But even that answer is not as clear as you might like. In fact, Colorado’s legal limit law has come under a lot of scrutiny.

Proving You Were Not Impaired

One positive aspect of the legal limit law may surprise. If you were to be pulled over, tested, and found in violation of the 5 nanogram law, you have a chance to prove that the levels of THC in your blood did not impair your driving. To prove it, you would have to put on evidence showing that you were not impaired. However this is difficult to do. It is best used as a last resort, and better to avoid altogether.

You may wonder how the police are allowed to test drivers’ blood at all. In addition to passing recreational marijuana laws, legal limit laws, and others, Colorado has an implied consent law too. That means that every driver in Colorado has consented to be tested for blood or other drugs if a police officer has reasonable grounds to believe a driver is under the influence of drugs or alcohol. And the officer can test blood, saliva, urine, or breath under the law.

So How Long Should You Wait?

The immediate answer is that you should wait until the THC levels in your blood are below 5 nanograms. Being certain you are not under the influence is important because getting caught carries multiple, severe penalties. You could lose your license, go to jail, have a conviction on your record, or more.

Contact my office to speak with an experienced DUI attorney. The initial consultation is free.