What are the penalties for marijuana DUI in Colorado? 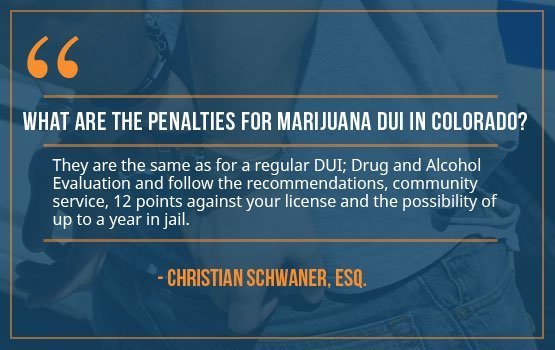 The penalties for marijuana DUI in Colorado are the same as for a regular DUI; Drug and Alcohol Evaluation and follow the recommendations, community service, 12 points against your license and the possibility of up to a year in jail.

There is an ongoing debate regarding whether the legalization of marijuana makes the roads increasingly dangerous. The Colorado Department of Transportation is investing heavily in education and awareness regarding marijuana use and driving. Their campaign, “Drive High, Get a DUI,” is aimed at educating the public on impaired judgement when getting behind the wheel high.

Colorado State Patrol has also invested in training state troopers for drug recognition. Regardless of where you stand on the marijuana debate, it is vital to remember that a DUI for marijuana use comes with the same harsh penalties as driving under the influence of alcohol.

Even a first-time DUI arrest carries with it serious penalties. As mentioned above, the penalties for a DUI involving Marijuana are the same as one involving alcohol. This can include:

The legal limit for marijuana is five nanograms of active tetrahydrocannabinol (THC) in their blood can be prosecuted for a DUI. If you test above the legal limit, you will have to go through a DMV hearing to determine whether your license is suspended.

How A DUI Arrest Affects Your Driver’s License

For a first offense, you are subject to license suspension and points against your license. Additional DUI convictions may result in increasingly serious consequences that may affect your ability to drive.. You may also be required to install equipment in your car that measures your level of impairment before your license is able to be reinstated. The lower end of penalties includes license suspension for 9 months. The second conviction may cause your license to be suspended up to a year. A third conviction can revoke your license for up to two years.

Points against your drivers’ license may increase your auto insurance premium, and/or subject you to additional fees on top of your premium.

Further driver’s license consequences involve the installation of an ignition interlock system–a mobile breathalyzer test which will not allow you to drive your vehicle if any alcohol or other substance is detected.

If you have been arrested for a DUI involving Marijuana in Colorado, you need an experienced attorney on your side to reduce your penalties. The Law Offices of Christian A. Schwaner, P.C. can help. Contact us today to discuss your case with a free initial consultation.