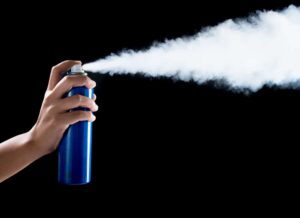 A charge of driving under the influence (DUI) can take many forms and have different variations. Due to the wide selection of drug combinations available, one of them is operating a vehicle while huffing.

A DUI for compressed air huffing carries different penalties depending on the state, but it is categorized as impaired driving. Depending on your age, level of intoxication, and if anyone was injured, Colorado Springs has several distinct charges for driving while intoxicated or under the influence of drugs.

The success of your case depends heavily on your ability to retain the services of a defense attorney with considerable expertise in handling DUI for canned air cases. We briefly cover some frequently asked questions regarding a huffing DUI to prepare you for your first free session.

Is Air Huffing Illegal in Colorado?

According to Colorado Revised Statutes Section 18-18-412, it is against the law to intentionally and willfully:

assist another individual intentionally in using any such substance for such objectives.

In addition, one or more of the following compounds or goods containing such substances are considered “toxic vapors:”

Examples of dangerous fumes include nail polish remover, nitrous oxide, cooking spray, cleaning sprays, glue, and hair spray. The National Institute on Drug Abuse reported that these chemicals greatly impact coordination and consciousness. So, it is illegal to be under the influence of these harmful vapors and attempt to drive.

When misused and inhaled, canned air can cause severe neurological abnormalities and lifelong brain damage because it is essentially a poison that was never intended to be ingested. Many of the active ingredients found in huffing products can cause the following debilitating effects:

Hospital research shows that the high from huffing can typically last 45 minutes, but the effects can also be paralyzing, cause hallucinations, and affect decision-making. Driving after huffing compressed air is extremely unsafe, as such impairments while operating a vehicle can lead to serious injury or death.

Can You Beat a DUI Charge for Huffing Compressed Air?

Unlike alcohol, detection for huffing compressed air can be tricky. There is no smell, and it leaves the system quickly, so fighting and winning a DUI for compressed air huffing is possible. If this is your first misdemeanor, your probability of avoiding a penalty may increase.

In speaking with a DUI attorney, they will advise you of strong defense points that diminish the evidence that the authorities may have against you. Successful defense arguments include:

What Is the Penalty for Huffing While Driving in Colorado?

The abuse of toxic fumes is categorized as a level 2 drug misdemeanor. The penalty for a compressed air huffing DUI was updated to go into effect on March 1, 2020, and requires probation of up to one year, potential jail time of 120 days, and a fine of up to $500. Three or more violations will get you up to 180 days in jail.

How Can a Colorado DUI Lawyer Help My Case?

A Colorado DUI lawyer can use the facts of your case to reach a favorable outcome.

Since inhaling a toxic vapor can slow one’s reaction time and lead to the person passing out, police will focus on the driver’s impairment and potential harm to others without valid proof that you huffed compressed air – since testing is difficult to complete quickly.

Even if you are guilty of driving while impaired after huffing compressed air, speaking with a DUI attorney will help you defend yourself and secure your future.

DUI and Your 4th Amendment Rights

The Fourth Amendment safeguards people from unauthorized searches, seizures, and arrests and necessitates a court-issued warrant even in situations when there is probable cause.  However, there is

Can You Get a DUI on a Bike?

[caption id="attachment_3516696" align="alignright" width="300"] Can you get a DUI on a bike? Yes! If you’re charged with intoxication while using a bicycle, call Christian A. Schwaner for a

What Are the Penalties for Violating DUI Probation?

Depending on if this is your first offense or not, violating your DUI probation can result in fines, jail, community service, or tracking devices. These choices are open to the probation officer and

What Happens If I Get Caught Driving in Colorado During a DUI License Suspension?