Home » Blog » DUI Defence » What Happens If I Get Caught Driving in Colorado During a DUI License Suspension? 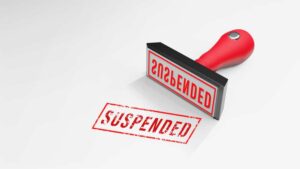 There can be harsh repercussions for driving while your license is suspended in Colorado. You can be subject to penalties, including fines, jail time, and additional license suspensions, depending on the cause of the suspension. If this is your first time violating this law, you might only receive a warning or a minimal fine.

If it is not your first violation, or if the suspension was due to a more serious infraction (like drunk driving), you may be subject to much tougher penalties.

Getting legal counsel is crucial if you are discovered operating a vehicle while your license is under a DUI suspension. A skilled criminal defense lawyer can work to lessen the severity of your penalty and make sure that your rights are upheld at all times.

What Exactly Is Restricted Driving in Colorado?

According to Colorado’s Revised Statutes 42-2-138, driving when your license is revoked, denied, or suspended is known as “driving under restraint,” or DUR. Typically, this is a minor offense. The penalty is more severe if your driving privileges were suspended due to a drug- or alcohol-related crime.

If you have violated Colorado drunk driving laws or been convicted of DUR before, you know that subsequent convictions can lead to significant license suspensions and perhaps permanent revocation.

Penalties for Driving on A DUI License Suspension

The consequences are substantially more severe if you had your license suspended due to a DUI or other similar incident.

For a First DUR Offense:

For a Second or Subsequent Offense:

What Happens if You Get Pulled Over With a Suspended License in Colorado?

If you get pulled over with a suspended license in Colorado, you will be issued a citation. It does not matter if you were driving safely and committing no other traffic violations; the Colorado DMV recognizes driver’s license suspensions, revocations, and other restrictions from any state. Depending on the severity of the offense, the consequences can range from fines to jail time.

Driving with a revoked license carries different consequences depending on the original offense. If it was due to an accumulation of points or unpaid tickets, then you may face fines and additional points added to your record.

If it was due to a DUI or reckless driving charge, then you may face more serious consequences such as an extended loss of driving privileges,  jail time, or even having your vehicle impounded. In either case, it is important to contact an attorney who can help you understand your rights and navigate through this difficult situation.

The Facts about Ignition Interlock Devices

An ignition interlock device is intended to disable the car when a driver has been drinking. The system functions by requiring a breath sample prior to starting the engine and at regular intervals during the journey.

This makes it possible to prevent drunk drivers from endangering themselves or others. This is a good alternative for people who have had their driving privileges restricted because they will still be allowed to drive as long as they have the interlock installed in their vehicles.

When drivers know their car won’t start if they have been drinking, the devices also give them the incentive to stay sober. In some court-ordered situations where people must demonstrate their sobriety before being permitted to drive again, ignition interlock devices are a useful tool.

What if I Disable the Ignition Interlock Device or Drive a Non-Equipped Vehicle?

If a driver doesn’t show up for device service, their license will be suspended, and they won’t be allowed to drive until they do. Driving privileges will also be suspended until they enter into a new lease agreement if the ignition interlock device supplier cancels the lease or before the condition is fulfilled.

If the device detects alcohol three times in any twelve consecutive months, the driver may face suspension and an extension of their interlock requirement of up to one year for each set of three failures. Drivers must take these rules seriously in order to avoid harsh fines.

Yes. Charges of driving while restrained in Colorado may be defended in one of the following three ways:

No Knowledge of Suspension

No DUR crime occurred unless the District Attorney can show that someone in the defendant’s situation would have known their driving privileges were revoked.

On occasion, the state believes in error that the defendant’s license was revoked. Maybe there was a mix-up at the DMV, or the officer who pulled you over ran the wrong name.

Charges of DUR should be withdrawn if the defendant can demonstrate that they held a valid license at the time of the incident.

Even in an emergency situation, it is against the law to drive while your license is suspended. The D.A. may decide to drop the criminal case, however, if the defendant had a good reason for operating a vehicle without a valid license at the time.

For instance, if an ambulance wasn’t available, you might need to transport a patient to the hospital or flee a wildfire.

What if I Am Arrested for Driving Under a Revocation – DUR?

Getting caught driving while your license is suspended or revoked (DUR) can have serious repercussions. It can be challenging to mount a successful defense against charges of DUR. People who find themselves in this situation do, however, have some choices.

If you can prove, for instance, that you were only driving because of a life-or-death emergency, the court may decide to be lenient. You may also have a case if you were not given adequate notice of your license’s revocation or suspension or if it was the result of a clerical or filing error.

Have You Been Caught Driving Under a DUI License Suspension in Colorado? We Can Help.

If you have been charged with DUR, you should speak with a criminal defense attorney who has experience with such cases immediately. Christian Schwaner has extensive experience helping people with DUI offenses and license suspensions to walk through the legal process.

Legal representation can be crucial to your freedom, your reputation, and your finances when you are facing charges of driving under the influence of alcohol or drugs or have been caught driving on a DUI license suspension in Colorado.

DUI and Your 4th Amendment Rights

The Fourth Amendment safeguards people from unauthorized searches, seizures, and arrests and necessitates a court-issued warrant even in situations when there is probable cause.  However, there is

Can You Get a DUI on a Bike?

[caption id="attachment_3516696" align="alignright" width="300"] Can you get a DUI on a bike? Yes! If you’re charged with intoxication while using a bicycle, call Christian A. Schwaner for a

A charge of driving under the influence (DUI) can take many forms and have different variations. Due to the wide selection of drug combinations available, one of them is operating a vehicle while

What Are the Penalties for Violating DUI Probation?

Depending on if this is your first offense or not, violating your DUI probation can result in fines, jail, community service, or tracking devices. These choices are open to the probation officer and